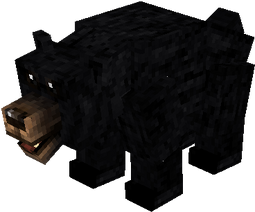 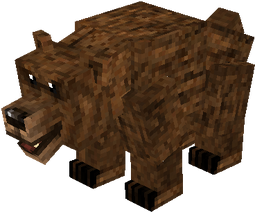 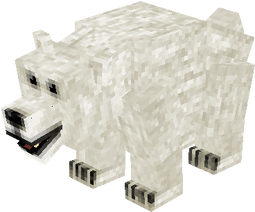 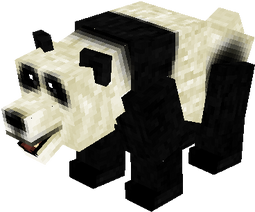 Bears are tamable mobs that come with several variants.

Grizzly bears, black bears and pandas spawn on grass blocks at light levels of 9 or more with at least 2 block space above. Polar bears spawn in ice plains, ice mountains, and ice spikes biomes. They often spawn in groups of 4 of their own species during world generation. Bear cubs will occasionally spawn with adults.

When killed, bears will drop:

Bears wander around aimlessly, roaring occasionally. Black bears and grizzly bears have similar behavior to rats in the way they attack; at day, or in high light levels, grizzly bears and black bears are neutral, but once they get into light levels of 7 or less, or if provoked, they will become hostile towards the player. Polar bears are always aggressive, and will attack the player on sight.

Pandas are the only passive type of bear, and will not react when hit. Wild black bears, grizzly bears and polar bears will stand up on their hind legs occasionally, especially when a player is near. Pandas will sit instead of standing upright.

Grizzly bears, polar bears and black bears will attack other mobs (with the exception of big cats and other bears); most of which includes cows, sheep, rabbits, foxes and turkeys. Bear cubs are passive, and will not attack if provoked.

A bear can be tamed by giving a cub any type of meat, both cooked or raw (they don't get food poisoning from consumption of raw meat). Pandas can be tamed by feeding them sugar canes. When the naming screen appears, the bear has been tamed.

Feeding tamed bears any meat together in an enclosed space will make them breed. The offspring will grow progressively larger with time until they reach their full size. The naming screen will also appear as soon as the offspring is produced, and, once named, will be tamed to the player. If the bear is born and the player isn't nearby once the naming screen appears, the bear will become wild.

The breeding pair needs to be kept away from other bears, and also need to be kept close in order to breed, therefore it is recommended to place them in a fenced area.

There are four types of bears; black bears, polar bears, pandas, and grizzly bears. Polar bears are the largest bear, followed by grizzlies and black bears, with pandas being the smallest.

Tamed bears can wear either normal or crafted saddles. Once a bear is tamed and saddled, the player can control it with the same controls that apply to other rideable mobs. The player can dismount with the sneak key.

A ridden bear will automatically run up any one block high slope. They are however, much slower in comparison with ridden big cats and manticores, but they can be combined with speed potions.

If a bear has been given a chest, it will acquire 18 inventory slots. The chest can be accessed with sneak and use.

Chests can be given to a bear with a right-click, and afterwards the chest cannot be removed except by killing the carrier, placing the bear in a pet amulet, or by using shears.