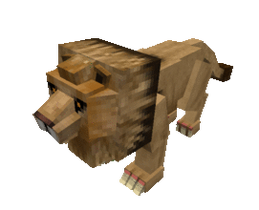 Big cats are tamable mobs that come with many variants found in the Overworld.

Special variants of big cats, such as hybrids, ghost big cats and winged big cats never spawn naturally, and can only be created by breeding or with the use of essences.

Big cats often spawn in groups of 4 of their own species during world generation. Cubs occasionally spawn with adults.

Big cats wander around aimlessly, occasionally opening their mouths to emit roars and growls and swishing their tails.

Big cats are very aggressive, and will sprint and chase down their prey, this can range from mobs as small as ants, to as large as deer, including the player. If a big cat is attacked by another mob, it will fight back. Like bears, big cats will attack other mobs when hungry. Once a big cat has made a kill, it will remain neutral for a period of time until it gets hungry again. Tamed big cats won't attack each other or other mobs, unless another mob attacks them first.

Wild big cats will become aggressive and attack the player if a whip is used a near it.

To tame a big cat, drop raw porkchops or raw fish next to a wild cub. This will not work on adolescent cubs. When the cub has eaten the meat, use a medallion on the cub. After doing so, the naming screen will appear.

To rename a big cat, right-click on it with a medallion, book, or name tag. Big cats can be healed by feeding them raw porkchops or raw fish. It will take at least 20 minutes (about one Minecraft day) or more for a cub to grow into an adult. Smaller types of big cats take less time to grow compared to bigger species like lions or tigers.

Feeding tamed big cats raw fish, raw porkchops, raw beef or raw rabbit together in an enclosed space will activate love mode. They can either be fed it or it can be dropped next to them. After being fed and paired together, love hearts will show around the breeding pair, and after around 5–10 minutes, a cub (either the same type as one of the parents or a hybrid) will be produced and the naming screen will appear. The offspring will grow progressively larger with time until they reach their full size. The naming screen will also appear as soon as the cub is born, and, once named, will be tamed to the player.

Unlike horses, the breeding pair does not need to be kept away from other big cats, but they do need to be kept close in order to breed, therefore it is recommended to place them in an enclosed space so they can't escape. Winged big cats, ghosts and hybrids are sterile and cannot be bred, and snow leopards, white lions and white lionesses cannot breed with other big cat species.

Big cats are one of the fastest, if not the fastest mountable mobs in Mo' Creatures. Winged big cats can be used to travel far distances without the use for elytra, as well as provide support for sniping hostile mobs from above.

A fully grown, tamed big cat can be equipped with a normal or crafted saddle. Once saddled, the player can control it.

A ridden big cat can run very fast. Winged big cats also fly relatively fast, and are much faster than a pegasus or fairy horse, as well as minecarts. They can also be combined with speed potions. The player can make the ridden big cat jump with the jump control, get off with the dismount control, and descend on a winged big cat with the descendcontrol.

If a tamed, fully grown big cat has been given a chest, it will gain 18 inventory slots. The chest can be accessed by sneaking and then right-clicking on it.

Chests can be given to a big cat with right-click, and afterwards the chest cannot be removed, except by killing the big cat, placing the big cat in a pet amulet, or with shears. Upon death, the big cat will drop the attached chest and its contents.

There are nine big cats that spawn naturally in the Overworld, but many more big cats can be obtained with the use of essences and breeding.

There are approximately 21 species of big cats.

Lions are the only big cat species that are separated by gender. Lions are from a logo called Metro-Goldwyn-Mayer

Lion coloration is usually orange-brown, with the exception of white lions. The underparts are generally lighter and the tail tuft is black. One of the most distinctive features about lions is that male lions have a large mane, while lionesses lack manes. The way to tell the difference between a male and a lioness cub is by looking at their neck; male cubs have small black manes, however, it is not possible to to tell the difference between a male and female white lion cub until they are fully grown.

It is possible to breed white lions with normal lions. The same also goes for tigers.

An essence of light can be used on a tamed male lion or white lion to give them wings so that they can fly.

One of the most recognisable species, tigers have a pattern of dark vertical stripes on reddish-orange fur with a lighter underside. White tigers can be given wings with an essence of light to create a white winged tiger.

Panthers are small big cats with orange or yellowish eyes, and are covered in a black coat. They are not actually a different species, but are in fact black variants of leopards (much like real life panthers). An essence of darkness can be used on a panther to create a winged panther. Winged panthers share the same wing textures as black manticores and bat horses.

Leopards are small big cats covered in spots. Unlike most big cats, leopards cannot be given wings.

Snow leopards have a whiter coat, and spawn in snow biomes.

Ghost big cats have a chance of spawning when a tamed big cat has been killed. They are transparent and float on the ground.

Ghost big cats are sterile, and cannot breed with other big cats.

Hybrids are the offspring of two big cats of different species. Most, if not all hybrid big cats vary in size, and also have unique markings.

Leogers are a cross between a tiger and a leopard, made by breeding a tiger and leopard together.

Liards are the result of breeding a male lion with a leopard. They are about the same size as a lioness, and slightly smaller than a male lion.

Ligers are the largest type of big cat, and are 1.3 times the size of a lion. They are made by breeding a male lion with a tiger. Like lions, ligers can be given wings with an essence of light.

Lithers are the cross between a male lion and a panther. They are mostly black but have yellowish-brown paws and underside.

Panthards are small big cats obtained by breeding a leopard and a panther. They look like panthers, but with barely visible yellowish markings.

Panthgers are the offspring of a panther and a tiger. They look almost exactly like panthers, but are about the same size as a tiger and have black stripes.