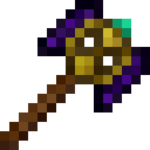 The builder hammer is a tool that can be used to place blocks from a distance.

Currently, there is no way to obtain the builder hammer without going into creative mode or with inventory editors. However, it is planned to be added as a boss drop from one of the three ogre bosses in the Ogre Lair.

The hammer cannot be crafted. It also does not spawn in any naturally generated chests (such as those found in abandoned mineshafts or villages).

The builder hammer can place almost any block at a range much further than the player can normally place, from any distance away up to the farthest block that can be seen (100 blocks or more). The block it places is the first block in your inventory hotbar. To place a block with it, use the hammer anywhere desired.

Plant and mushroom blocks can be placed in any light level, even though mushrooms need light levels of 12 or less to be placed normally. However, if mushrooms are placed next to flowers or any other non-solid block, they will disappear after the block has been updated.

In survival and adventure mode,, the builder hammer has limited durability, and each use of the hammer will consume its durability up by one use per block placed. It does, however, have an extremely high durability, allowing the player to use it for a very long time.