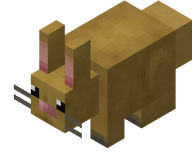 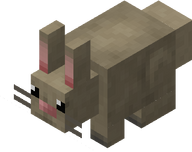 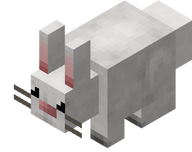 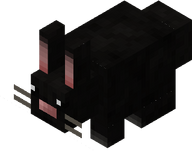 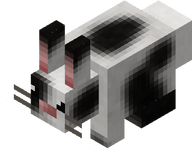 Bunnies spawn on grass and Wyvern Lair grass blocks at light levels of 9 or more, with at least 2 block space above. They often spawn in groups of 4 during world generation.

Bunnies do not drop anything when killed.

Bunnies are passive mobs, and will not attack you if you provoke them. They hop around aimlessly instead of walking, avoid cliffs high enough to cause damage, and usually stay out of water.

Bunnies are 'shy' mobs, and will flee from the player when approached. Bunnies don't usually make sounds, but emit a loud shriek when you hit them.

A bunny can be tamed by simply right-clicking on one. This will result in the bunny being placed on top of your head, and the naming window to pop up. Once named, the bunny will become tamed.

Bunnies can be renamed with a book, medallion or name tag. They can be healed by feeding them carrots, and can also be leashed.

When right-clicked on, a tamed bunny will go onto your head. The bunny can be taken off with shift. Right-clicking will stop them from performing actions (including opening doors, crafting, or anything else that requires right-clicking). With a bunny on the player's head, any mob the player is riding on (such as a horse) will receive a massive speed boost, making it almost impossible to control it.

Bunnies can be bred by feeding them golden carrots.

The bunnies have to be at full health for them to be able to breed. As bunnies have a tendency to move around constantly, it is recommended to enclose them together in a small fenced area.

The colour of the baby bunny is always random and it is not determined by the color of the parents. Baby rabbits take 3-5 days to mature.

Prior to v6.2.1, bunnies could be bred by placing two tamed bunnies of any color nearby in an open space or enclosure. They would then breed, spawning several new bunnies. As they reproduced quite rapidly, Bunny breeding programs had to be kept track of to reduce game lag or overflow. Typically, bunny litters would be around 3-12 baby bunnies.