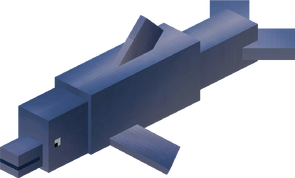 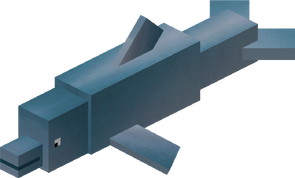 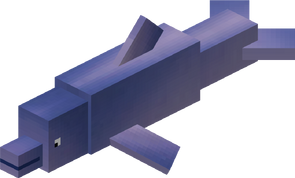 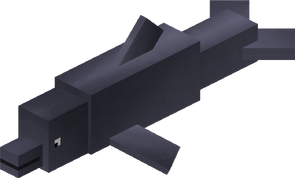 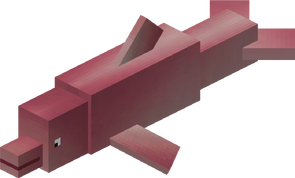 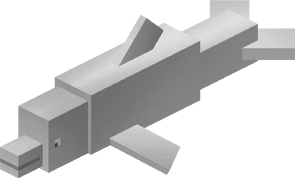 Dolphins spawn in water between layers 46 and sea level in ocean and deep ocean biomes. Dolphins can be found in all biomes except the frozen ocean biome, or the cold ocean biome.

When killed, dolphins will drop 0–2 raw fish. The drops can be increased with the Looting enchantment. They drop 1–3 experience when killed by a player or tamed wolf.

Dolphins swim around aimlessly, and can be heard clicking and squeaking occasionally. Dolphins are always neutral towards the player, and will attack if provoked, unless they are tamed.

They wander around aimlessly, swimming up and down through each layer. They are not attracted to light. Dolphins suffocate if they are beached on land for too long. While on land, they do not move, and stay stationary until they suffocate. They can take fall damage and burn like any land mob, but they cannot drown.

A dolphin can be tamed by right-clicking on the dolphin and mounting it until the naming screen appears. It takes patience with this method, however, as the dolphin will attempt to kick you off every time you mount it.

Feeding a dolphin raw fish can increase the chances of taming it. The dolphin will try to buck you off if you mount it, but if you're persistent enough, the dolphin will eventually become tame if it allows you to stay on. A blue dolphin requires 2 raw fish and an albino dolphin requires 12 raw fish. Rarer dolphins are noticeably faster than common ones. A tamed dolphin can be renamed with a name tag, book, or medallion. Tamed dolphins cannot be caught in a pet amulet.

Dolphins can be healed with raw or cooked fish, raw salmon or cooked salmon.

To breed dolphins you will require:

To breed dolphins you must give each a cooked fish. Unlike horses, dolphins cannot become sterile and may breed indefinitely. After 5 minutes there will be a baby dolphin. If the two dolphins are of the same breed they will always have a baby of that breed, otherwise their "total genetic value" (TGV) determines both the chance of getting a certain breed and which breed will be created.

Dolphins are great for traversing through water, getting way from sharks or piranhas, and they can swim much faster than the player, and around the same speed as a boat.

The rarer the dolphin, the faster it can swim in water whilst being ridden. Dolphins can be a more convenient method of transportation than boats, and can easily be moved into another body of water with the use of a fish net.

Each dolphin has different speed, temperament, and chance to spawn in the wild:

Dolphins need to be removed as they are already in vanilla since 1.13.