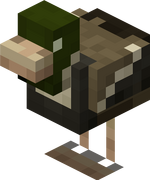 Ducks are common passive mobs.They can be tamed using uncooked fish or bread which can be used to breed two ducks together to make a duckling. Note like chickens, ducks can not repoduce for 20 minutes after breeding.

Ducks naturally spawn on grass blocks with 2 blocks of free space above it at light level of 9 or more, and spawn in groups of 2 upon world generation.

Ducks wander around aimlessly, and usually avoid water, though they can swim in it. When falling they will flap their wings quickly and fall slowly, making them immune to fall damage. Despite this, they will still avoid falling off cliffs high enough to cause fall damage.

Ducks are based on the chicken model, but they have a different texture and make different sounds. Ducks can be heard quacking occasionally. Like chickens, ducks will lay eggs every 5 minutes.

They share some behaviors with other passive mobs, including chickens:

When swimming, ducks need two blocks of air above their heads or else they will take damage when they float up and will eventually die.