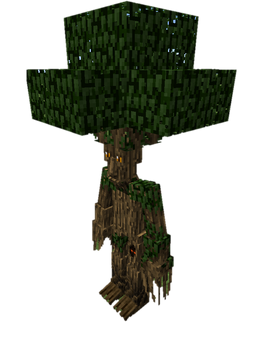 Ents are tall tree-like mobs that can plant flowers and mushrooms.

Ents spawn on grass blocks at light levels of 9 or more with a large enough block space above. They often spawn in groups of 4 during world generation.

Ents wander around aimlessly, avoiding cliffs high enough to cause fall damage (despite being immune to damage) and staying out of water. If an ent is provoked, it will give chase towards the player and throw them high into the air, which can cause fall damage or even death, unless the player is wearing boots enchanted with Feather Falling. Ents also attract small creatures.

Ents are invulnerable to almost all forms of damage, including drowning, suffocating, lava, wither, harming potions, poison, arrows, fall damage, and explosions, making any attempts to kill them useless. Their only weaknesses are an axe and fire.

If the player hurts an ent with a tamed wolf nearby, the wolf will attempt to attack the ent, but will deal no damage, and the wolf will only end up pushing it.

Ents have the ability to create a 3x3 square of plants and mushrooms (flowers such as poppies or dandelions, brown and red mushrooms, saplings, grass, and ferns). They will do this at random intervals. Keep in mind that this will replace any blocks in the 3x3 area, including chests, hoppers, or any other blocks that store items. To reduce the likelihood of this occurring, keep ents away from houses, villages or other buildings where items have been stored to prevent any loss.