An essence of darkness is an item with multiple effects.

An essence of darkness has many effects when used on a certain mob. When the mob has been fed the essence, it will apply the corresponding effect:

After using the essence, a glass bottle will be returned to the player's inventory. 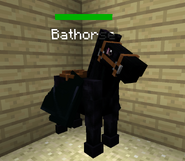 A bat horse, a type of horse created by an essence of darkness.
Wyvern.jpg
A wyvern ostrich, another type of mob created with the essence.
Add a photo to this gallery
Retrieved from "https://mocreatures.fandom.com/wiki/Essence_of_Darkness?oldid=92527"
Community content is available under CC-BY-SA unless otherwise noted.