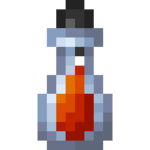 An essence of fire is an item and one of the four essences.

Like the other essences, an essence of fire has various effects when used on a certain mob. After the essence has been used, the player will get a glass bottle in return.

After a mob has been fed the essence, it will apply the following effect: