Solid surfaced blocks with a minimum of two block spaces above them.

Goats are attracted to item entities floating on the ground, and will eat any item, including blocks, diamonds, weapons, and tools, Goats cannot eat experience orbs. It's recommended to keep your valuables in a chest to keep them safe from goats. A goat will also follow the player if they have any edible item in hand.

A goat can be tamed by feeding it any edible food item, including rotten flesh and spider eyes (without getting the risk of food poisoning) and both types of golden apples. When the naming screen appears, the goat has been tamed. To change a goat's name, right-click on it with a book, name tag, or medallion. To heal a hurt goat, feed it with any edible item. Goats can also be leashed, but the goat may eat the lead if it breaks.

Tamed goats will not attack the player if provoked, but males will if the player attempts to milk them. 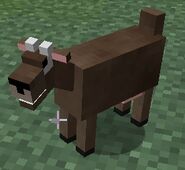 Goats eating diamonds.
Add a photo to this gallery
Retrieved from "https://mocreatures.fandom.com/wiki/Goat?oldid=90921"
Community content is available under CC-BY-SA unless otherwise noted.