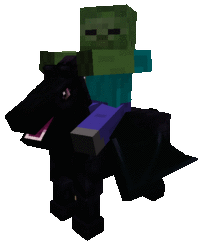 Horsemobs are hostile variants of horses.

Undead, skeleton and bat horsemobs spawn almost anywhere in the Overworld at light levels of 7 or less.

All four horsemobs will drop:

After an undead horsemob has been killed, a slime of random size will spawn in its place.

Horsemobs spawn in dimly light areas, and behave similarly to horses; they will wander around aimlessly, and emit neighs and whinnies occasionally. They emit aggressive neighs when attacking the player. All types of horsemobs are hostile and will attack the player if they are within a 12-16 block radius. Horsemobs, with the exception of nightmare horsemobs, will burn and take damage in sunlight, unless they are in water, a dark place such as a cave, or under the effect of a fire resistance potion.

Both undead and skeleton horsemobs are immune to poison, will take damage from splash potions of healing, and are healed with splash potions of harming. When a zombie horsemob has been killed, a slime of random size will spawn in its place.