Ogres are large neutral mobs that can destroy blocks.

Ogres spawn in light levels of 7 or less, so as long as there is a large enough block space above. Also, due to their large size, it is possible for them to spawn in smaller places and suffocate, especially in caves.

Green ogres and fire ogres spawn on top of solid blocks on the surface of the Overworld, but green ogres may also spawn in caves. Fire ogres have a 25% chance to spawn in the Overworld. Cave ogres have a 75% chance to spawn only on blocks that can't see the sky (for example, caves) located under 50 or so blocks height (the surface is 64-65 blocks).

Fire ogres spawn in the Nether, and can be found at any light level.

When killed ogres will drop: 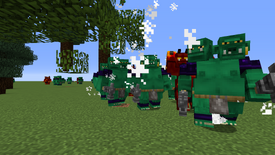 Ogres are neutral mobs, and remain so throughout the day, but will turn hostile if the light level decreases to 7 or less, or if provoked. They will continue to pursue the player even in light levels or 9 or more, although they may stop their pursuit and otherwise just ignore the player. Ogres can be heard making loud grunting and growling sounds occasionally. Green ogres and fire ogres do not burn in sunlight, but cave ogres will take damage from sunlight when exposed to it.

Other than damaging the player with their weapons, if a player gets too close to an ogre, they can damage the player by "touching" them, much like a zombie.

Ogres can spawn with either one or two heads, but this won't change their strength. They can also see through transparent blocks, such as glass, so you should choose wisely when you place windows in a house. If an ogre harms any mobs nearby from its blast radius, the mob/s will target the ogre. Although some hostile mobs will otherwise just ignore them and continue to attack the player.

Like big golems and mini golems, ogres respect the mobGriefing gamerule, and will not destroy blocks if set to true.

The three types of ogres, with both one and two heads.

Green ogres are the most common and weakest out of the three ogres. Fire ogres are more uncommon than green ogres; they destroy blocks and ignite the ground on impact. They are also resistant to fire. Cave ogres have a larger blast radius than the other two ogres.