Features in the Mo' Creatures mod that were removed during development or updates. These features may have been replaced, or the mod author decided against the feature later on.

A ropes was an item the player could use on a tamed mob to make them follow him/her. They were originally meant to tow horses, but the rope could then be used with all other tamable mobs. Ropes could not be used on Minecraft mobs or be tied to fences. Using a rope on a mob would tie it to the mob, allowing it to be moved by the player. Multiple mobs could be held by ropes at once.

An image of ropes being used on pegasus released by DrZhark.

If a kitty was picked up with a rope, it would be held by its feet, and would become aggressive towards the player if carried this way. When the kitty was released, it would attack the player.

Ropes were used to craft all three types of tusks, but leads have replaced the rope's usage in the recipes.

Ropes were removed in v6.0.0 DEV R1, sometime after leads were added.

The main usage of fish bowls was to catch and store fishies. In order to use a fish bowl, the bowl had to be filled up with water from any body of water. When the fish bowl had been filled with water, a fishy could be caught by getting close to it and using the bowl on it. A caught fish would swim around in circles in the bowl. If the player right-clicked with a fish bowl that had a fishy in it, the fishy would be released. The player could pick up a fish bowl and have it placed on their head when right-clicked with an empty hand. A fish bowl could be placed back into the player's inventory by right-clicking on it with any type of pickaxe.

Like kitty beds and litter boxes, fish bowls were subject to physics, and could be burnt, suffocate, and take damage from the player and "die".

Fish bowls were removed in v8.0.1, but it's still unclear why DrZhark removed them. It's probably due to glitches with fish bowls that he will fix in the future.

Keys were items that would be given to the player after they had added a chest to a mount, such as a donkey or mule. After being given a key, the player could access the mount's inventory with right-click.

Keys were craftable with the following recipe:

Keys were removed in v8.0.0 DEVa. Since then, the player can shift and right-click to access a mob's inventory.

Horse armor was a special type of armor that could be placed on horses. It was removed from the mod in v6.0.0 DEV R1, and added into Minecraft along with horses in the 1.6 update. Leather horse armor can be crafted, though only in the Bedrock Edition.

Prior to v6.0.1, all three types of horse armor could be crafted. These recipes have since been removed. 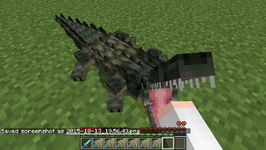 A player caught in a crocodile's jaws.

The death roll was removed in DEV v8.0.0 due to glitches. It is possible that it will be added back when fixed.

Prior to v8.1.0, before big cats were revamped, they had eight different models.