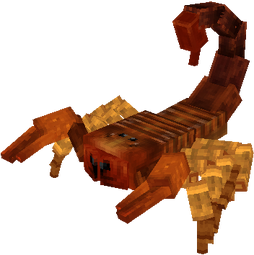 Scorpions are tamable mobs that come with many variants.

Nether scorpions can be found in the Nether at any light level.

Scorpions will drop upon death:

Scorpions with babies on their back will drop 0–4 baby scorpions upon death.

Scorpions have similar behavior to that of spiders; they are hostile to the player as long as the light level immediately around them is 9 or less; otherwise they won't attack unless they are hit first. Hostile scorpions will continue to chase the player even if they are exposed to well-lit locations. Scorpions make squeaking and clicking sounds occasionally. They do not get set on fire during the day.

Like spiders, insects, and crabs, scorpions can climb up vertically, meaning they can scale up walls and fences. As this is the case, walls and fences make poor protection for any tamed mobs, unless you build a roof over your structures.

Scorpions have two methods of attack: a melee attack, which they use with their claws, and a venomous sting. If a scorpion stings the player, they will get a negative effect. Dirt scorpions poison the player, cave scorpions give nausea, frost scorpions slow the player down with a Slowness I effect, and nether scorpions can set you on fire. Each effect lasts for three seconds.

A scorpion can be tamed by picking up a baby scorpion and then naming it. To find baby scorpions, look for a scorpion that has small scorpions on its back, and kill it. This will make the babies fall to the ground. The babies can then be picked up by right-clicking on them, which will allow the scorpion to be named. If the baby scorpion grows past this stage, it cannot be tamed.

Like other baby mobs, baby scorpions take a while to grow to full size. Fully-grown tamed scorpions may attack other mobs, including your pet(s), so they should be kept separately in an enclosure. Once the baby has grown to full size, the scorpion can then be ridden by placing a saddle on it. This can be either a Minecraft saddle or a crafted saddle. Like other tamed mobs, scorpions will sit when a whip is used on them, and will continue to remain stationary until ridden, or if the whip is used again. Tamed scorpions may attack other mobs, but they do not attack mobs for you.

A scorpion egg can be acquired by using an essence of darkness on any tamed scorpion. Placing this on the ground will cause it to hatch within a couple of minutes, and it is necessary to stay near the egg in order to tame the hatched scorpion (placing it requires looking at the ground and you must be where the egg is wanted, then right-click). This will hatch a baby scorpion that can be named, just as if a scorpion with babies on its back was killed.

A tamed scorpion can be healed by feeding it raw or cooked rat.

There is also a special type of scorpion that can be created by the player.

An undead scorpion is a rotting-green scorpion with red eyes. They do not attack the player, unless a scroll of freedom has been used on it.

Scorpions are quite slow mobs when being ridden, but they can make this up for their ability to climb walls. They can also be useful for climbing hills or mountains, as they are immune to fall damage.

Once a scorpion is tamed and saddled, the player can control it with standard directional controls, jump, and the mouse. The player dismounts using the dismount control.

When riding a scorpion, the hunger bar is replaced by the scorpion's health in survival or adventure mode. It uses a slightly different heart texture than the player's health bar. A player can also use any item while riding a scorpion (this also includes interacting with blocks such as furnaces or crafting tables).

A ridden scorpion will automatically run up any one block high slope, as well as scale up solid blocks.

Scorpions are relatively fast mobs. They remain the same speed moving backwards, but are very slow when moving sideways. A ridden scorpion can also be made to jump.