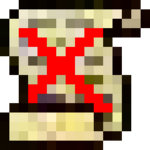 A scroll of freedom is an item that removes the ownership of a tamed mob that belongs to the player.

A scroll of freedom can be used on a tamed mob to set it free, and doing so will make it become wild again. Also, if the mob was wearing a saddle, chest or armor, they will be dropped, as well as the contents of its inventory. A mob that is initially neutral or hostile (such as a big cat, ostrich or manticore etc,) to the player will become aggressive again after it has become wild or if attacked.