Sharks are tamable mobs that spawn in oceans.

Sharks spawn in ocean and deep ocean biomes that is at least 2 blocks deep and around 6-8 blocks wide/deep.

Sharks are 0.5 blocks wide and 3 blocks long at first, but can grow up to 1 block wide and 6 blocks long.

When killed, sharks will drop 0-3 shark teeth (60% chance), and have a 10% chance to drop an egg. Eggs can only be obtained if the difficulty is set to Easy or higher. They drop 5 experience when killed by a player or tamed wolf.

Sharks are hostile mobs; they will attack and pursue any nearby players that are in the water, if within 16 blocks of a shark. They will also attack squids. Sharks have high attack damage, and can kill an unprotected player in about three or four hits, depending on the difficulty.

Sharks will not attack on Peaceful difficulty, but they will still attempt to chase you.

A shark can be tamed by hatching a shark egg in water. In order to get a tamed shark, the egg must be hatched by placing it in a body of water, which will hatch into a friendly baby shark. Tamed sharks will not attack the player or other sharks.

If you cannot get a shark egg from sharks, input the following command. Be sure to have cheats enabled on your world or server. 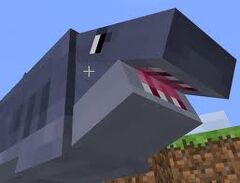 A shark up close.

Various shark sizes, as shown with a wild and tamed shark.

One of the Mo' Creatures banners featuring a shark.

The first image of sharks released. 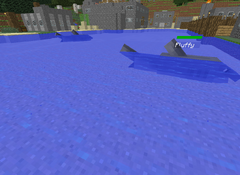 Several sharks underwater.
Add a photo to this gallery
Retrieved from "https://mocreatures.fandom.com/wiki/Shark?oldid=92198"
Community content is available under CC-BY-SA unless otherwise noted.