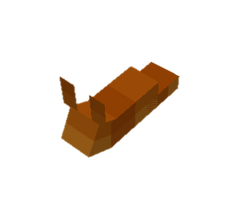 Snails are small passive mobs that hide from the player when approached.

Snails and slugs spawn on grass blocks at light levels of 9 or more with at least 2 block space above. They often spawn in groups of 4 during world generation.

Snails come in six different colors: brown, red, yellow, green that have shells, and black and orange without shells.

Snails drop 0–2 slimeballs when killed and 1–3 experience when killed by a player or tamed wolf.

Snails wander around aimlessly, but rather slowly. Snails may be the slowest mobs in Mo' Creatures. Snails will hide in their shells from any mob or player within 2–3 blocks, regardless of its size (they even hide from mobs as small as ants). Snails will continue to hide in their shell, even when hit. When the player or mob moves away from the snail, it will come out of its shell and move again.

Snails without shells will not hide, but stop moving when a player or mob approaches it.