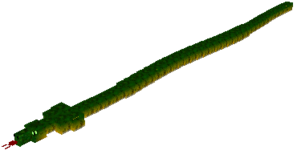 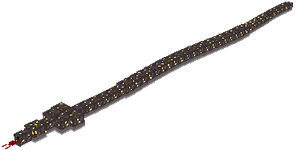 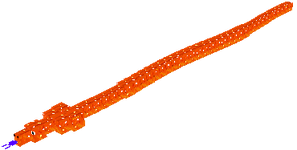 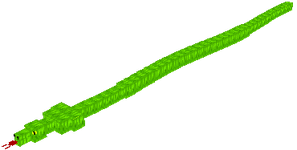 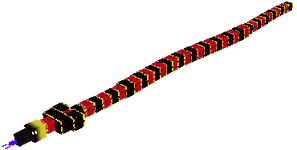 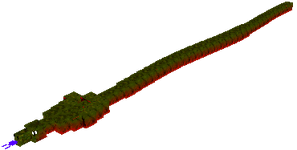 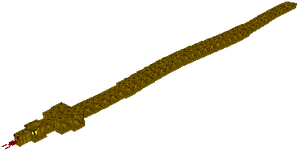 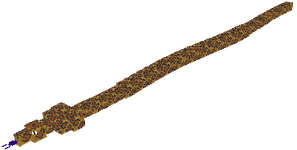 Snakes are tamable mobs found in the Overworld and the Wyvern Lair.

Snakes spawn on opaque blocks at light levels of 9 or more with at least 2 block space above. They often spawn in groups of 4 during world generation, but mostly of the same species; some types of snakes only spawn in certain biomes.

Rattlesnakes and spotted snakes can only be found in deserts; cobras spawn in jungles; green, orange and coral snakes spawn in plains, and dark snakes can spawn almost anywhere.

Snakes can spawn anywhere in the Wyvern Lair in light levels of 9 or more.

Snakes will drop 0–2 eggs and 1 to 3 experience when killed by a player or tamed wolf.

Snakes wander around aimlessly, hissing occasionally. Each type of snake has their own behavior, and some may be harder to find than others.

Unlike other mobs, snakes can't jump. Like scorpions, insects, mice and spiders, snakes can scale up blocks vertically.

If the player holds a mouse or bird near a snake and then drops it, the snake will hunt down and kill the creature.

Snakes can exist either in a passive, neutral, or hostile state, depending on the species. Passive snakes will never attack the player. Passive snakes include dark snakes and spotted snakes.

Hostile snakes are initially neutral, but if a player approaches one, they will lift their head up and begin to hiss at them as a warning. If you move out of its range, the snake will ignore you. However, if you continue to remain in its range, the snake will become aggressive and attack. The snake will still be hostile even if you stay out of its sight. If you approach the hostile snake again, it will attack without provocation. Some aggressive species are capable of inflicting poison.

Some hostile snakes can poison the player when attacking. They're deadly if the player is touched by one, as the poison effect lasts for 7 seconds and lower the player's health to 7

hearts in about 10 seconds. The effect makes you very vulnerable to any damage for about 20 to 30 seconds, especially if you haven't killed the snake or if you're not equipped with armor or milk buckets. Dirt scorpion armor and golden apples benefit you with Regeneration and Absorption, which can help with the poison.

Wild snakes cannot be tamed. Instead, the player has to obtain a snake egg. When a snake egg has been obtained, place the egg in a well lit area. When the egg hatches, the baby snake will become tame and the naming screen will appear. As time passes, the snake will grow larger until it reaches its maximum size. Green snakes, coral snakes and spotted snakes stay small, but pythons and cobras can grow relatively large.

Tamed snakes are passive, and will never attack the player. Tamed snakes that are usually hostile, such as cobras, will still lift their head up when you approach it, but it won't attack you.