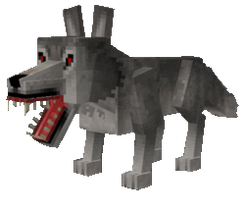 Wild wolves (or Wolves) are neutral mobs found in the Overworld.

Wild wolves spawn on the surface of the Overworld at light levels of 7 or less.

Wolves spawn in dimly lit places on the surface of the Overworld, or at night. They will attack the player during the day if provoked or in places with a light level of 9 or less, and will continue to be hostile even if exposed to higher light levels.

At night, wild wolves roam the Overworld in packs of 1–4. Wolves will howl and open their mouths occasionally. They make snarls and growls when hit, and a soft howl when killed. They will attack other mobs smaller than them, including farm animals. Pets and farm animals need to be kept indoors or in fenced areas at night to prevent wolf attacks.

Like rats, wolves can become a nuisance if not dealt with in large numbers or when fighting more dangerous mobs. Any wolf with a skeleton, silver skeleton or zombie riding it will gain a significant speed boost.