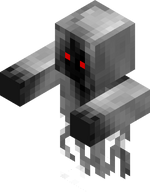 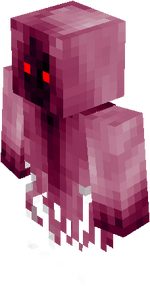 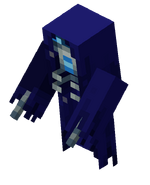 Wraiths can be found in the Overworld almost anywhere in light levels of 7 or less.

Flame wraiths can spawn almost anywhere in the Nether at any light level.

Wraiths wander or fly around aimlessly at night, making ghostly moaning sounds. A wraith will target the player within 12–16 blocks, and attacks by touching the player. Like zombies, wraiths have an attack animation when hitting the player. If a flame wraith touches the player, they will be set on fire for at least 15 seconds.

Like other "undead" mobs, wraiths will take damage and die in sunlight, but they don't get set on fire. They are also translucent, which makes it somewhat difficult to be able to see them in caves, as they blend in with the stone surroundings if they are in caves or other dark places.