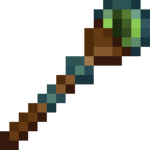 A wyvern portal staff is an important tool that is needed to access the Wyvern Lair.

The wyvern portal staff can be used in any dimension (the Overworld, the Nether, or the End) to get to the Wyvern Lair.

Like other tools, the staff can be enchanted, however, attempting to use the staff will have it removed from your inventory, even in Creative mode.